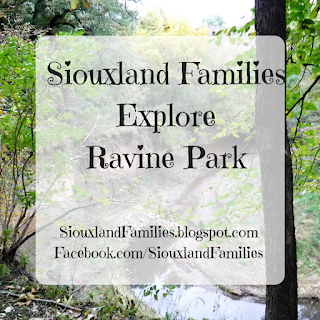 Fall hikes are my favorite. The leaves are changing color, the mosquitoes are dead, and the weather is cool enough you aren't too hot in hiking pants. And surprisingly, one of our Sioux City city parks offers a great Iowa hike with a view of the Missouri River, varied terrain, wildlife, and even a little bit of spooky history!

Where is Ravine Park and the First Bride's Grave?

Ravine Park includes 120 acres of land at the intersection of Lincoln Way and Lewis Blvd. The entrance of the park has a small gravel parking area off Lincoln Way.

From the parking area, visitors cross a bridge across the ravine to get to the rest of the park. My kids love looking over the bridge, and if it has rained enough, you can even play Pooh Sticks (basically, stick races, but we call it Pooh Sticks because it is mentioned in the book The House at Pooh Corner--let each kid choose a distinctive stick, then everyone tosses their sticks in the water from the upstream side of the bridge, then everyone runs across to the other side of the bridge. Whoever's stick appears from under the bridge first wins).


On the other side of the bridge is an open grassy area that would be nice for playing ball or Frisbee, and a picnic table area. Near the picnic table area is a set of steep wooden stairs. This is the way to the trail. There is a bench most of the way up to the ridge, so that is a great place to stop to catch your breath or drink water or whatever you need to do.  Once you make it to the top of the ridge, you can go left to hike along a grassy ridge and then down into the forested area around the ravine,  but my recommendation would be to head right first, and keep going until you get to the "First Bride's Grave".

The First Bride's Grave: Who is Rosalie Menard Leonais and why is she important?

The "First Brides's Grave is a stone monument commemorating Rosalie Menard Leonais. The grave itself is inside a gated area on top of the loess bluff, with a spectacular view of Sioux City below. The daughter of a French-Canadian fur trader and a Native American mother, Rosalie moved to the Perry Creek area of Sioux City with her family as a teen. When Rosalie Menards married Joseph Leonais in 1953, she became the bride in the first record marriage in Sioux City. The Rosalie and Joseph stayed in the area, living first on land purchased from Theophile Brugier and later on a farm near the Floyd River. The Leonais family had 2 daughters and son. Unfortunately, Rosalie Menard Leonais died in 1865 giving birth to their fourth child, a son named William, when she was 27 years old, and Rosalie became the first bride of a settler to die in Sioux City. You can find out more about the Leonais family and see a reproduction of their log cabin, in the Sioux City Public Museum! 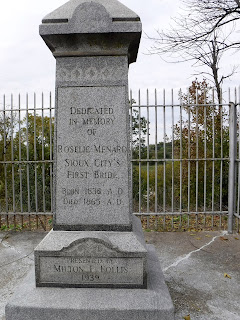 Beyond the Grave: Hilltop Trails at Ravine Park

The grave and the trail to it/from it are both quite close to the edge of the ridge. This means there is an amazing view of the Missouri River, Nebraska, and even a bit of South Dakota, but it also means it is very dangerous--kids running off here could be fatal, not just frustrating--so I recommend all kids under 8ish be held or have their hands held. From the grave, you turn back the way you came, and either go back down the stairs, or keep going straight along the ridge. If you choose to continue along the ridge path, you'll come to an area full of tall grasses. The city does mow back here, but hasn't recently so it was taller than me! 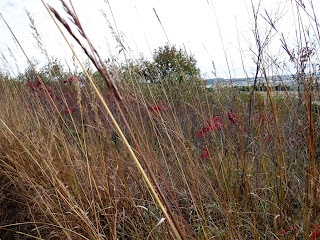 There are great views up here, both gazing down at Siouxland, and of interesting plants and grasses. In fall especially, I love the variety of leaves and grasses changing colors! 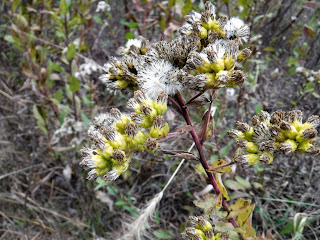 The trail takes you past an industrial tower of some sort--maybe a radio tower?--and then keeps going for quite a ways. Eventually you turn left and head down into the forested area. The forested area was my family's favorite! There were some trees down on the path that we had fun climbing over, but nothing dangerous. We also saw at least two whitetail deer romping around in the woods. My 9 year old was especially intrigued by a tree we dubbed "the treehouse" because it had 3 boards nailed to it like the entrance to a treehouse. However it looked like they must have been nailed in a long time ago, because one had twisted around to a different side of the tree, and the remaining two were too far apart to climb successfully. I reached out to the city's parks & rec department to see if they know anything about the history of this tree, and I will update this post if there is a fun story to share! 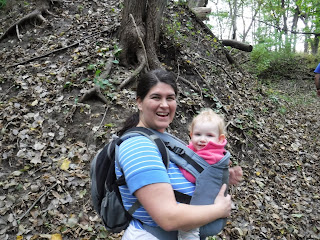 Eventually there's a fork and you can go around the ravine and come out on Lincoln Way a couple blocks from the parking area, or head back to the clearing near the parking area.  There are some parts of the trail in the forested area where you are very close to the ravine and again, it would be very dangerous to let kids get too close to the edge. There are lots of little hills through the park, and if it is muddy, I recommend hiking shoes or boots, or running shoes with good traction. In all, hiking to the First Bride's Grave and all around the ravine and back to the clearing at a pace a kid could keep up took us between an hour and a half and two hours. The ravine trail alone or to the grave and back would both be great options for shorter hikes. 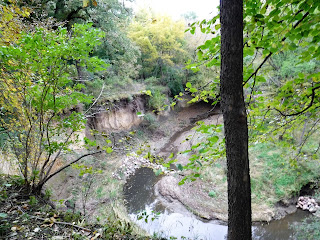 Our family always has fun hiking at Ravine Park, and I hope yours will too!