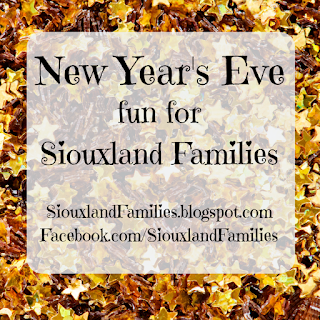 2020 is almost here! Are you looking for a fun way to spend it with your kids? While I definitely love playing board games, eating junk food, Netflix countdowns, and other New Year's fun at home, going out can be a really special way to celebrate the end of the year and the start of the new one. Here are some of the planned events your family might enjoy together to celebrate New Year's Eve. All events are on New Year's Eve, Tuesday 12/31/19, unless otherwise noted. You might also enjoy my post on Christmas events in Sioux City.

For more KC New Year's Eve events including the KC Zoo, World of Fun Winterfest and much more, check out this post from the KC Parent website

There are also some great events planned for family fun on New Year's Day to help your family kick the year off your way, including:

Happy New Year Siouxland! Thanks for letting me be part of your 2019, and thanks for being part of mine!