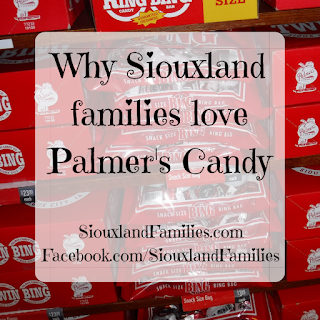 
Where is the Palmer's Old Tyme Candy Shoppe?

The Palmer's candy store is at 405 Wesley Parkway in downtown Sioux City, Iowa, just off I-29. There is free parking at the Palmer's Old Tyme Candy Shoppe.
The Palmer's candy factory itself is nearby on Highway 75 North, but is not open to the public for tours at this time.

What kind of candy does Palmer's sell?

Honestly it'd probably be a shorter list to say what they don't sell! Basically other than specific branded candies from other companies (for example, if you really want a Reese's Peanut Butter Cup or a Milky Way bar), they have most common types of candy and tons of surprising varieties. And they do carry some branded candies from other makers. But mostly, they sell their own makes.


There are sometimes treats that didn't pass quality control for visual reasons (they never sell anything that isn't delicious and safe to eat!), and those tend to be great deals so I definitely recommend grabbing them if you find them. Usually they are in the back of the store on a wooden shelving unit, in clear bags with the Palmer's logo and with the price written in sharpie. They look unassuming, but tend to be really delicious for really good prices. I've gotten things like chocolate covered caramel hearts, snowflake pretzels covered in white chocolate, and peanut-butter-filled pretzels covered in chocolate all in the seconds bags, and they were all amazing.


But most of the candy and other delicious fare in the store isn't seconds. There is a wide variety of pre-packaged candy including the Palmer's trademark candy bar, the Bing and Twin Bing, and while they're available in other cities too, they taste best when you buy them straight from Palmer's! And when there are new flavors, Palmer's usually has them first. Like these S'mores Bings they released in summer 2020:

The rows of pre-packaged candy are mostly Palmer's brand, but also a few other companies they buy from for the store, so be sure to read labels if you are shopping in that specific section and wanting Palmer's candy as souvenirs. There are also some Jelly Belly towers with just about every variety of Jelly Belly you can imagine, including some I didn't even know existed.

The main floor of the store is filled with rows of amazing bulk bins on tables. There are always chocolate covered pretzels, nuts, and raisins, plus uncovered nuts, seasonal candies like candy corn, "candy gems" (they look and taste like M&M's), gummy fruit slices, and old fashioned candies like opera creams. If something sounds intriguing but you aren't ready to commit, ask for a sample! Then let an employee know you would like them to bag the candy or nuts for you. 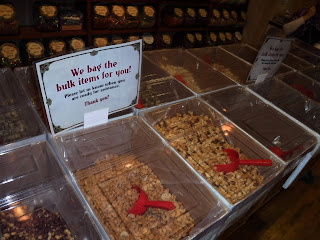 Then, behind the bulk bins is a wall with even more candies! Here you'll find a selection of rock candy, hard candies, and other delicious treats in cute glass jars.

To the left of the bulk bins there is a gourmet counter full of fudge, truffles, and other high-end treats. They also have a large selection of delicious handmade sugar-free treats!


Between the registers and the gourmet counter, you'll find a wall full of pre-made gift baskets for whatever season you're in with chocolates and other candies, along with seasonal plush, packaged in cute baskets, boxes, and buckets. They had Valentine baskets when I went most recently, and they looked so good! 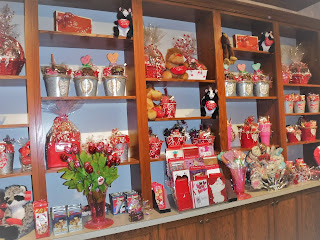 What else does the Palmer's Old Tyme Candy Shoppe sell?


Besides candy, the Palmer's Old Tyme Candy Shoppe also has a corner devoted to a wide variety of specialty foods. Many, like Wild Hill Honey, Jolly Time Popcorn, and Sioux City Jerky, are locally sourced in Siouxland, some like Dimock cheese from South Dakota are regionally sourced, and some like Caillebaut white chocolate, are from farther away but only available locally from the Palmer's gourmet store!

The Palmer's Old Tyme Candy Shoppe is currently the only place in Sioux City to buy the limited run Bing ice cream from Stensland Farms! IStensland Farms is a northwest Iowa dairy farm and creamery that makes and sells ice cream, milk, butter, and other dairy products, primarily at their stores in Sioux Falls, but also across the area. Their Bing ice cream is essentially a rich cherry ice cream with a chocolate swirl and chunks of Bing candy bars, including both the cherry nougat interior and the chocolate & peanut coating. If you like cherry ice cream and Bing bars, there's a pretty good chance you'll love this!

The Palmer's Old Tyme Candy Shoppe also sell Palmer's and Twin Bing souvenirs, like sweatshirts, tote bags, and even wallets made from Twin Bing wrappers, so fans can show their love of our hometown candy brand!

Besides their delicious edible treats, local foods, and gourmet groceries and fun Palmer's gear for sale, the Old Tyme Candy Shoppe also has a mini-museum devoted to the history of Palmer's Candy. The store has a selection of antique candy-making equipment and other artifacts from throughout the company's past. In 1892 Palmer's was founded by the Palmer family as a wholesale fruit company, and by 1900 had expanded to also include candy! Palmer's is still owned by the Palmer family after over a century, and Palmer's continue to make their candy right here in Sioux City, Iowa!