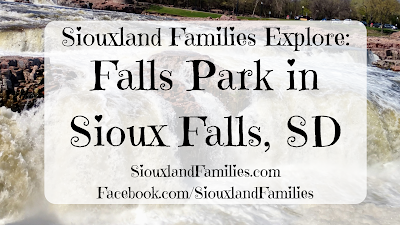 Just an hour north of Sioux City on the Big Sioux River, you find the city of Sioux Falls, and nestled in the heart of it all is 123 acres of Falls Park, where the namesake waterfalls provide a scenic background for family fun. Over 7000 gallons of water per second fall over 100 feet! Here's a look at a recent visit to Falls Park:


Want to find out more? Read on!

As you saw, Falls Park in Sioux Falls offers many other attractions to families beyond the beautiful waterfalls, like lots of grassy space, picnic tables, outdoor sculptures, and much more, including: 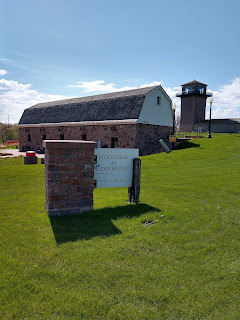 The Stockyards Ag Experience is a museum devoted to the history of the Sioux Falls stockyards and to agriculture in general. The upstairs consists mainly of informational exhibits and artifacts to look at, while the downstairs is almost a mini-children's museum. My kids loved the downstairs, especially a "farm to table" play area with tons of toy food. All the toy food had barcodes, and kids could take the food to a scanner to hear interesting facts about that particular food! The food was store in various displays, some like store shelves and others in a pretend kitchen with a fridge, freezer, counters, sink, and table. My kids were really sad when it was time to leave! The Stockyards Ag Experience is all housed in a barn built in the late 1800's and would be a good option if you are looking for things to do in Sioux Falls on a rainy day. You can find out more on the Stockyards Ag Experience website or connect with them on Facebook.


Just past the Stockyards Ag Experience is the Falls visitor center. When you enter, on your left is a gift shop on the ground level, featuring a wide variety of memorabilia like postcards, t-shirts, water bottles, and much more. To the right when you enter, you will see stairs and an elevator. Both take visitors up 5 stories to the top of the 50 foot tall observation tower. Enjoying the observation tower is free and open to the public, and the views from the top are truly spectacular! 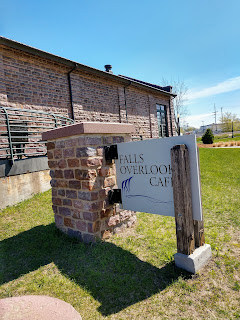 Just across the falls (don't worry--there's a bridge with good safety railings) is the Falls Overlook Café. The building which now houses the café was originally opened in 1908 as a hydroelectric plant, which closed in the 1970's and was donated to the city. It remained abandoned and vacant for a while, then became a café a couple decades later. And, starting May 2019, the café is under the ownership of Stensland Family Farms, a family owned dairy farm and creamery based in northwest Iowa, who now own and operate not just the Falls Overlook Café but also a store on West 41st Street which sells their cheese, milk, ice cream, and more.
My family and I tried 3 flavors of the Stensland Family Farms ice cream at the Falls Overlook Cafe: Heavenly Holstein (vanilla ice cream with black and white cookie crumbles), How Now Brown Cow (chocolate),  and Salted Caramel Pecan, plus their strawberry mango dairy free sorbet, and all of them were delicious! I had my strawberry mango sorbet in a waffle cone and it was well worth the upgrade. Overall, I thought their prices were very reasonable for such a gourmet treat, with the smallest size of ice cream starting under $1.75.

We didn't try any of their food this time, but it looks delicious on their website and social media. They offer a variety of soups, sandwiches, and salads, plus a few other fun options. I definitely want to try the pork nachos sometime!


Near the Falls Overlook Café remain the ruins of an old mill, the Queen Bee Mill, which was originally built in the early 1880's. The mill went out of operation  just a few years later, and most of the mill was burnt down in a fire in the 1950's. The Queen Bee Mill ruins are on the National Register of Historic Places.


A 200 foot open air shelter is home to the Sioux Falls Farmer's Market and many other festivals and events, and near it sits a fun play structure and a nice bathroom facility. The playground is wheelchair accessible and the surface is poured rubber, but the structure itself was pretty difficult to get up to. There were no play panels or other features on ground level and no wheelchair access to the play structures. Two of the slides could only be accessed by climbing ladders. They are still really fun, if you can get to them. There is plenty of grassy space behind the playground and bathrooms, and I would love to see the city add to the fun with some adaptive playground equipment in the future.

My only hesitation in recommending Falls Park is that it *is* possible to get dangerously close to the waterfall and people have died from falling in and getting caught by the rushing water. In 2018, a 5 year old girl died in the falls, and according to the Sioux Falls Argus Leader, at least 10 people have died in the falls since 1980, with many others requiring rescue. We still love Falls Park, but don't let your kids play close to the falls or on the rocks near the water. It looks refreshing and fun, but it isn't worth the risk. If your kids (and you!) want to climb on the rocks, look for outcroppings farther from the water. 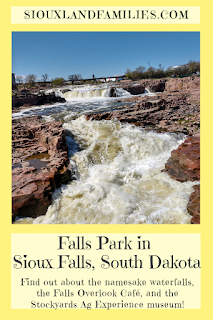 Falls Park is located near downtown Sioux Falls, South Dakota between North Phillips and North Weber and what would be about 1st through 5th streets: