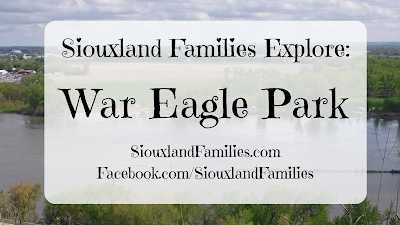 On Sioux City's west side, you can see the confluence of the Missouri and Big Sioux rivers, learn about some of Sioux City's early leaders, and more. Here's a peek:


What is the War Eagle Monument?

Sioux City's War Eagle Monument is a statue and plaques commemorating a native American leader who lived in the Siouxland area in the late 1800's. "War Eagle" was actually named Waŋbdí Okíčhize, which more accurately translates to Little Eagle, and was known for his commitment to peace with other tribes and with the pioneers coming to Sioux territory. Two of his daughters married a man named Theophile Bruguier, who was a fur trapper and is sometimes called the first white settler of Sioux City (his cabin is found at Riverside Park near Miracle Field.) War Eagle and his daughters who married Bruguier, Dawn and Blazing Cloud, are buried in the bluff under War Eagle Park.

At War Eagle Park, there is a monument to Bruguier along a paved sidewalk leading to the War Eagle monument itself.

What is the Old Missouri River Trail?


War Eagle Park is also home to part of a trail that fur trappers used in the 1800's. In the 1920's, the DAR placed a plaque and stone marking the entrance to the trail, but over time, the stone and plaque were lost. Last year, Sioux City area historians, officials from the parks & rec department, and DAR members worked together to uncover the stone. The plaque is gone, but you can see the holes where it was originally attached. Even better, the forge that made the original plaque is still in operation and the city was able to order a duplicate! There may be plans in the future to uncover the exact path of the old trail, but for now, it's still fun to know you're pretty close!

Check out the Sioux City Journal website for more information about the rediscovery and restoration of the Old Missouri River Trail stone.


What else is at War Eagle Park?


Besides the War Eagle Monument and the Old Missouri River Trail marking stone, Sioux City's 27 acres of Eagle Park is also home to hiking trails with amazing views of the Missouri and Big Sioux Rivers and their confluence, or meeting point. From the top, you can see Iowa, Nebraska, and South Dakota all at the same time. There is also a handicap accessible restroom near the park entrance as well as some picnic tables.

From War Eagle Park you can see Iowa behind you and to the sides, across the Big Sioux River you can see South Dakota, and on the other side of the Missouri River, Nebraska. Where the two rivers meet is technically the border line between the 3 states!


While at War Eagle Park, I personally saw broken glass, beer cans, cigarette butts, assorted garbage from tires to tank tops, and worst of all, a hypodermic needle. For this reason, I do not recommend letting toddlers or preschoolers hike on their own feet. The actual monument area was very safe and clean, it was just the trails that had lots of litter and some graffiti on drainage structures.

Where is War Eagle Park? 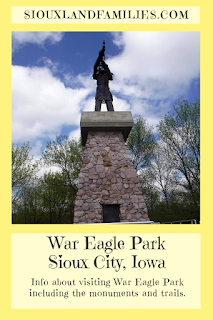