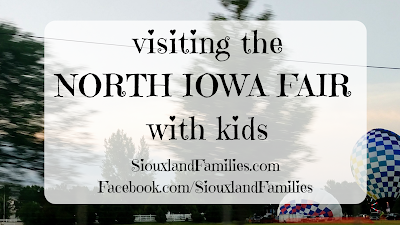 I absolutely love county fairs, so when I found out I had a family event in Mason City the same weekend as the 2019 North Iowa Fair, I lept at the chance to come early and check out the fair while I was there!
I reached out Visit Mason City to plan my visit, and along with lots of great info, they were also kind enough to provide free meals for my family at the fair, so be sure to scroll down for pics of that deliciousness! So here's a quick look at our trip to the North Iowa Fair, followed by the full details on visiting the North Iowa Fair with kids:


What is the North Iowa Fair?

Where is the North Iowa Fair?

The North Iowa Fair is held at the North Iowa Events Center at in Mason City, Iowa, about 3 hours from Sioux City. Most of the drive there is a pretty easy drive on Highway 20.


What is there for kids to do at the North Iowa Fair?

There's tons for kids to do at the North Iowa Fair. Specific attractions may vary by year, but in 2019 some of the great options included:

What can you eat at the North Iowa Fair?


The North Iowa Fair is small, but don't let that fool you--there's no shortage of delicious food! There is a building that is basically a 4H run restaurant where everything smells amazing, plus there were a variety of food trucks selling fair classics like funnel cake, mini donuts, and giant lemonades, and meals from many different types of cuisine including Greek, Mexican, BBQ, American, and more.
We ended up eating pulled pork sandwiches and grilled hot dogs from Black Dog Barbecue from Mason City and grilled cheese sandwich and a cheesy BLT from the Lunch Wagon from Waterloo, and all of it was amazing.


I also couldn't believe how reasonable the prices are. As I mentioned, the meals were covered by Visit Mason City, but I looked at the prices and the more complicated entrees were about $6-8 and the simpler entrees were only $3-4, which is more like what you'd expect at a family-owned restaurant than at a fair. I really appreciated that they don't price gouge as much as a lot of fair vendors tend to, and if we are lucky enough to go back (and I hope we will be!), I will definitely plan on eating there, because I know I'll get great food for a great price!

What should you bring with you to visit the North Iowa Fair with kids?


I would recommend bringing the same types of things you'd bring to any fair or outdoor festival: 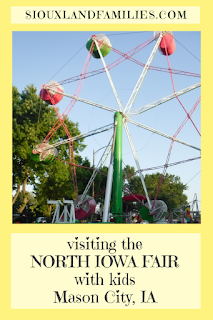