Nick Jr. Live! Move to the Music at the Sioux City Orpheum!

August 30, 2019
**UPDATE: The giveaway ended and the winner was Tammy S! Congrats Tammy! Also updated post with pics and thoughts to review my family's experience going to Nick Jr. Live: Move to the Music!**

This post is sponsored by the Sioux City Orpheum Theatre 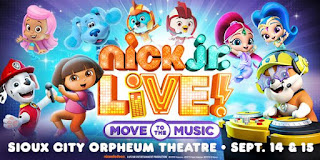 Nickelodeon fans, get ready! Nick Jr. Live: Move to the Music is coming to the Sioux City Orpheum Theater this September, and it's going to be epic.

What is Nick Jr. Live: Move to the Music?


Nick Jr. Live: Move to the Music is a brand new live stage production featuring talented singers, dancers, and entertainers in costume as favorite Nick Jr. characters! The show actually just started their run in Cedar Rapids a week before coming to Sioux City, so we are some of the first people who get to see it! This new story stars Dora the Explorer and her puppy buddies, Marshall and Rubble, plus lots of other familiar friends from Nick Jr show. Here are the shows with characters appearing in Nick Jr Live: Move to the Music:


Nick Jr. Live includes lots of singing, dancing, and laughs, and promises to be an "interactive adventure" that will captivate their young audiences. I think they made good on that promise. The energetic show was just the right length, and the intermission was well-placed. I'm really impressed with how great of a job the cast did, especially considering this is just the second weekend of their run!


There is no age restriction for attending this show, but the Nick Junior Live website says it will be most enjoyed by kids about 1-6 years old. This was my two youngest kids' first time in a real theater and it was a perfect show for that. They stayed happy and interested the entire time!

The show is 65 minutes long, with a 15 minute long intermission near the middle.

When will Nick Jr. Live! Move to the Music be in Sioux City?

Nick Jr. Live: Move to the Music will be at the Sioux City Orpheum, downtown on Pierce Street, for three show times:

The Sioux City Orpheum Theatre recommends arriving at shows early to make sure you have time to park, walk to the theatre, and find your seat!


How can I get tickets to Nick Jr. Live in Sioux City?

You can buy tickets to Nick Jr. Live! Move to the Music at the Sioux City Orpheum online, from OrpheumLive.com, by calling (712)279-4850, or at the PrimeBank Box Office at the Tyson Events Center.

Regular tickets start at $19.50 and are required for everyone who is 1 year old or older.
VIP Tickets including some of the best seats in the house, special behind-the-scenes meet & greet opportunities, photo opps, souvenir lanyard and some Nick Jr. surprises start at $99.

You can also WIN a free family 4-pack of tickets, courtesy of the Sioux City Orpheum Theatre! To enter, head over to the Siouxland Families Blog Facebook page and find the official giveaway post (Don't have FB? Send me an e-mail and I'll get you entered!)
I'll choose a winner on Monday, September 9th and contact you to make sure you get your tickets!

Get ready for some adorable fun, Siouxland families!