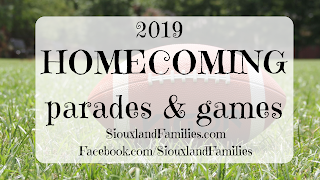 Nothing says fall like homecoming parades and football games! Luckily Siouxland has plenty of great ones! All the parades and games are open to the public, and the parades are all free to attend, while the games have a small admission charge. This list will be updated as more details on routes, themes, and more are available!

We have been to a few of the local homecoming parades in the past and they are always lots of fun, and the high schoolers seem to enjoy it when there are lots of little kids around to clap and wave at them, and the kids love the festive floats, the candy, and seeing the big kids at the school they might get to go to when they're older! No matter what Siouxland team you're cheering for, there's tons of homecoming fun just around the corner!