Midwesterners to Watch in the 2020 Olympic Season 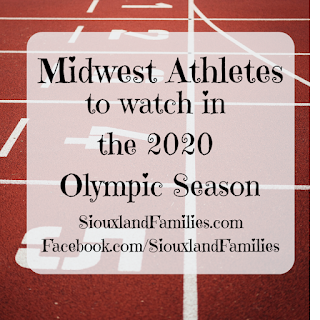 In August 2020, the eyes of the world will turn to Japan for amazing feats of athleticism at the Tokyo Olympics. While part of the fun is cheering for and celebrating athletes from around the globe and all across our nation, I also love knowing specifically about the athletes from our area. If you do too, read on to find out some of the athletes with Midwestern roots that you should watch in the 2020 Olympic Season. For purposes of this post, I'm including people from the Midwest who are currently living somewhere else for training (for example, Dempster Christenson from Sioux Falls is training at the Olympic training center in Colorado) but I'm not including people whose only Midwest connection is attending college in the Midwest.

Several Midwest athletes have already qualified for Team USA, and I'm also including those who are likely qualifiers in sports that have not yet set their rosters or had their qualifying competitions or races. I'll try to update throughout the spring and summer as people qualify and are officially on the team! If you have a recommendation for an athlete I should include, please let me know so I can add them.

Also, be sure to catch the 2020 US Olympic Swim Trials in Omaha, Nebraska this June to cheer on our nation's best aquatic athletes without flying to Japan!


So as you watch the wonderful athletes from all around the nation and globe, keep an eye out for these Midwesterners striving for their place on Team USA and the podium at Tokyo!

December 26, 2019
Each month I bring you info on family friendly events and activities in the Siouxland Area. If you know of one I have missed, please leave me a comment or send me an email. I will update my lists throughout the month as I hear of new things to do in Sioux City and our surrounding communities, so check back often for the latest scoop! I  recommend checking out myEvent Lists tabto find our lists for othermonths, and this month, you may also enjoy my posts on Best Places to Play Inside in Siouxland, Snow Sports in Siouxland, and Best Places to Play Inside in Sioux Falls.