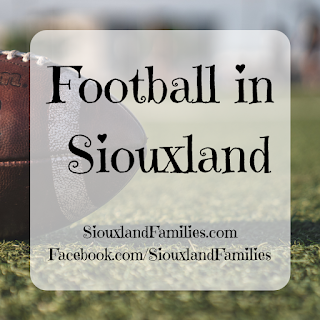 With football's biggest game just around the corner (check out my top food and fun suggestions for Chiefs fans!), I thought it could be fun to talk about football in Siouxland. While we don't have any NFL teams (Chiefs and Vikings are about tied for closest NFL stadium to downtown Sioux City), we do have lots of football for fans to enjoy, from professional, collegiate, and high school teams:

In these leagues, they have made the playoffs more than a dozen times, including 3 championship wins! The Sioux City Bandits football team play at Tyson Events Center in downtown Sioux City, and their colors are red and black.

The Sioux City Stampede was Sioux City's semi-pro outdoor football team from 2014 to 2019! Their future is uncertain, but I'll update if I heard of any new developments!

The University of South Dakota Coyotes are an NCAA Division I Football Championship Subdivision (formerly know as Division I-AA) football team and they play as part of the Missouri Valley Football Conference, along with rival SDSU Jackrabbits from Brookings, South Dakota. Their most recent postseason appearance was in 2017, where they won their first round game, but lost in the second round. The home stadium of the USD Coyotes is the Dakota Dome in Vermillion, South Dakota, and their colors are red and white.

Most of Siouxland's collegiate football teams play at the NAIA level, many in the Great Plains Athletic Conference, or GPAC, which has 12 teams that are all in Nebraska, Iowa, South Dakota, and North Dakota. Some of the teams in the Sioux City area playing at the NAIA level include:

There are dozens of high schools in Siouxland, and almost all have football programs. In Sioux City, the public high schools--East, West, and North--play at Morningside College's Elwood Olsen Stadium, while Bishop Heelan Catholic plays at Memorial Field on Hamilton Blvd. Heelan won the Iowa State Football 3A Championships in 2008 & 2013.

Some other standout high-school programs in the greater Siouxland area include:

I'm sure I missed some really fantastic programs, so if you know of a team I should include, leave a comment or send me an e-mail at SiouxlandFamiliesBlog at gmail dot com and let me know who, and why they deserve to be on this list!