Blippi the Musical Live at the Tyson Events Center

This post is sponsored by the Tyson Events Center.

Update/review after going to Blippi the Musical live at the Tyson Events Center:

My husband and I took two of our kids to Blippi the Musical at the Tyson and they had SO much fun. The show was full of songs that Blippi fans will recognize from his channel, some classic nursery rhymes, and a few songs that I hadn't personally heard before so may be original just for this production. Anyway, the songs were loosely connected to a simple plot that entertained the kids while still being easy for them to follow (Blippi has a "party machine" that breaks and he and his friends spend the show trying to fix it and having lots of fun along the way.)

The cast was energetic and professional, with good comedic timing and fed well off the audience energy. The kids in the audience were so into it. They broke into spontaneous roaring applause and laughter several times. If you have toddlers and/or preschool aged kids who like Blippi, they will probably have a blast at this show. This show definitely knew their ideal audience and targeted it perfectly!

Besides the show itself, there were also concessions open and a Blippi souvenir shop set up in the Tyson, and I saw lots of kids thrilled to get Blippi dolls, glasses, suspenders, and other fun reminders of the show.

The Tyson staff was helpful and professional, and the seats were clean and reasonably comfy. I will definitely not hesitate to attend other fun shows and events at the Tyson based on this experience!

Get ready for fun and exploration! Blippi the Musical is coming to Sioux City and your kids will love it! Here's a sneak peek of what you can expect from the show:

What is Blippi the Musical?

Blippi the Musical brings the YouTube character to the live stage with singing, dancing, and lots of laughs. One important thing to note is that Blippi on stage is not performed by the same actor as Blippi on YouTube.  That wouldn't bother my kids at all, but I think it's good to know! If you aren't sure if your kids will care, show them the video clip above. My kids were definitely excited about the video and did not recognize that it is a different actor than Stevin John who usually plays Blippi on YouTube. 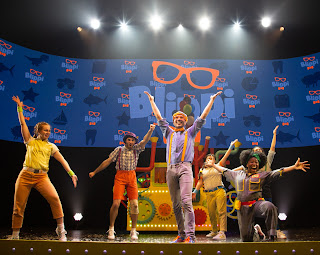 When and where is Blippi the Musical in Sioux City?

How to get tickets to Blippi the Musical

Getting ready for Blippi the Musical

Buying tickets is really the only thing you have to do to be ready for the musical. But for extra fun: 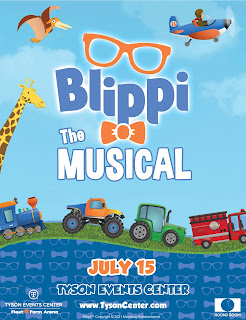