Watch out Nashville...the Midwest knows how to do a country Christmas right too, with Sara Evans leading the way! The multi-platinum artist from Missouri is known for her five (non-festive) #1 hits on the country charts and for being one of the most played female artists on country radio stations throughout the 2000s and 2010s, but oooh can she sing Christmas too! And she's bringing her spectacular Blue Christmas concert to Sioux City in December 2021. Here's what you should know about the concert, plus read to the end for info on how to win tickets courtesy of the Sioux City Orpheum Theatre! 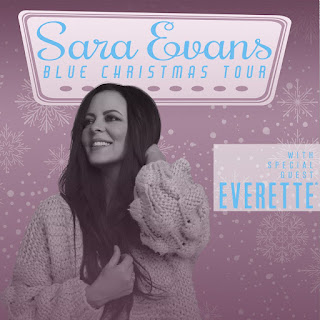 What to expect at the Sara Evans Christmas Concert

Country powerhouse Sara Evans brings Christmas joy to the Orpheum, with Christmas carols, holiday pop favorites, and originals. (Set list varies but check out her full "At Christmas" playlist on YouTube for an idea of what to expect!) Her impressive energy, versatility, and vocal range lets her shine on rockin' hits like Run, Run Rudolph while also delivering the high notes on O Holy Night the way few can.

Everette is opening for Sara Evans in Sioux City and the Kentucky duo is sure to delight audiences with their rockin twist on Christmas too!

For tickets and for more information

Tickets and more information are available directly from the Orpheum and that's the best way to make sure you're getting accurate info and legit tickets! Tickets start at $35, with VIP packages available for $207.50. VIP packages include ticket, meet & greet and photo with the artist, custom pint glass, and a printable copy of the setlist!

To win a pair of tickets to see Sara Evans Blue Christmas live at the Sioux City Orpheum Theatre on Thursday, December 16th courtesy of the Orpheum and Spectra Management, leave a comment here, on the official giveaway post on Facebook, on the official giveaway post on Instagram, and/or on all three for up to 3 entries. In your comment, tell me your favorite Christmas song! Be sure to comment by midnight on Sunday, December 13th, and I'll draw a winner and notify them on Monday, December 14th!