Zach Williams I Don't Want Christmas to End at the Orpheum 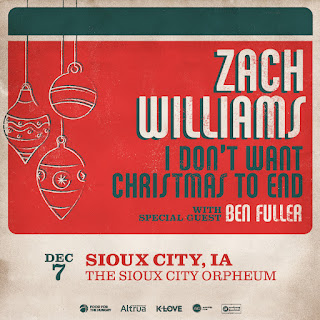 What is the Zach Williams' "I Don't Want Christmas to End" Tour?

Grammy-award-winner Zach Williams takes to the stage with some of his biggest hits, plus festive songs from hs holiday album. The tour also features Ben Fuller.

Here's one of the songs you might hear at the concert from Zach Williams:

And here's one of Ben Fuller's Christmas songs!

When and where is the Zach Williams "I Don't Want Christmas to End" tour in Sioux City?

Zach Williams will be performing on Wednesday, December 7th, 2022, at 7pm at the Sioux City Orpheum Theatre. The Orpheum is located at 528 Pierce Street in downtown Sioux City. There is some street parking nearby (and street parking in Sioux City is free after 5pm on weekdays! Yay!), as well as some ramps, but it can fill up quickly, so plan on arriving early enough to plan to walk a few blocks if necessary.

You can buy tickets to Zach William's Christmas Sioux City tour date at the Sioux City Orpheum online at OrpheumLive.com, in-person at the Tyson Events Center box office, or by calling (712)279-4850. Regular tickets are $18. There's also a VIP experience which includes a gourmet meal made by Napa Valley chef Paul Fields, plus a meet & greet and photo opportunity with Zach Williams, premium seating, a goodie bag, and more! VIP tickets start at $217.25.

Buying tickets is really the only thing you have to do to be ready for the show. But for extra fun: