Guide to Music and Theater in Siouxland

May 05, 2021
Fine arts abound in Siouxland! In addition to excellent school performances from area high schools and colleges, there are also a large number of professional and community theater and music performance groups in Sioux City, Sioux Falls, and other nearby communities in Iowa, Nebraska, and South Dakota. Here's where to catch the best choral and instrumental music, musicals, plays, dinner theatre, and more in Siouxland: 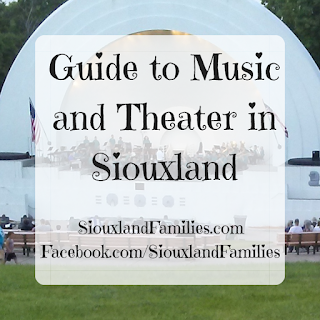 Le Mars, IA
This northwest Iowa family has serious pipes, and puts them to good use singing for audiences across the nation, and right here in Siouxland! When they aren't on the road, the Browns perform at the Browns Century Theater in Le Mars.
For more information, visit the Browns website or follow them on Facebook.

Sioux City, IA
Catch delightful instrumental music in Siouxland from your friends and neighbors, with a focus on marches, patriotic music, and pops. While many of the members are also in the Sioux City Symphony Orchestra, this community group is also open to amateurs and includes all sorts of ordinary folks putting on an extraordinary show. The Sioux City Municipal Band performs live at the Grandview Park Bandshell on Sunday evenings in summer.
For more information (including weekly performance notes) follow the Sioux City Municipal Band on Facebook

Sioux Falls, SD
This instrumental group has been performing to great acclaim since 1919. Most summers, they perform from May to August, with more than 15,000 lucky audience members hearing their music each year.
For more information, visit the Sioux Falls Municipal Band website.

Sioux City, IA
This choir is comprised of some of Sioux City's most talented children, performing classical and contemporary choral pieces.
For more information, visit the Siouxland Youth Chorus website.

Sioux City, IA
Professional performing arts productions and instruction for kids.
LAMB Arts is building a new home and performance space in the historic theater at 625 Douglas, which as the original Sioux City Auditorium when it was built in 1909! LAMB is restoring the theater and Siouxland audiences are in for a treat when it's complete!
For more information visit the Lamb Arts website, or connect with them on Facebook.

South Sioux City, NE
Siouxland's newest community theater, the New Stage Players, are based in South Sioux City. They're known for upbeat modern productions, and shows for kids including their Penguin Program productions which are designed to give kids and teens with special needs an opportunity to perform alongside their neurotypical peers.