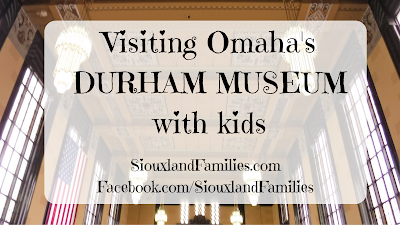 I received free admission to Omaha's Durham Museum so that I could check it out and share my experience with you! We went on a recent rainy day, and it was a perfect place to enjoy a few hours of family time! Take a quick look:


Doesn't it look fun? Here's a bit more in-depth info on the Durham Museum and what to expect if you visit the Durham with your kids:


What is the Durham Museum?

The Durham Museum is Omaha, Nebraska's premier history museum, featuring an impressive assortment of historical exhibits, mostly focused on local and regional history, but also special exhibits covering a wider variety of topics. The Durham Museum is affiliated with the Smithsonian Museum and the Field Museum.


Where is the Durham Museum?

The Durham Museum is in Omaha's old Union Station, at 801 South 10th Street. It's about an hour and a half drive from downtown Sioux City.


Permanent Exhibits at the Durham Museum

The Durham Museum has a large number of permanent exhibits including:

Temporary Exhibits at the Durham Museum

There's always something new at the Durham in their rotating exhibit hall! When we went in June 2019, there were two temporary exhibits happening: American Democracy, and Tyrannosaurs: Meet the Family: 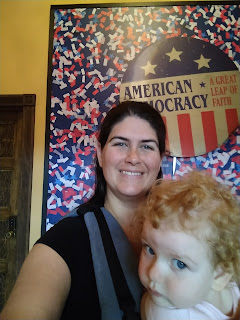 No photography was allowed in the American Democracy exhibit, but I took this cute selfie right outside it.
The exhibit was full of artifacts and information about the democratic process in the US, from our colonial roots, to suffrage movements to modern elections and political protests. My husband has a history degree and a law degree, and I have a political science degree with a mass comm minor, so we are pretty well versed in historical and modern US politics and campaigns, and there were things neither of us had seen. One of our favorite elements of the exhibit was a wall playing tv ads that had been run in presidential elections, including many from before we were born. Even when you've read about them in books, it's hard to get the full impact of the commercials without actually seeing them on an actual screen. Our youngest kids were not very interested in this exhibit, but there wasn't anything inappropriate for kids, and our 9 year-old was pretty excited about it. The American Democracy exhibit at the Durham Museum is probably most enjoyable for adults and for kids ages 10+.


The Tyrannosaur exhibit was probably our family's favorite thing in the Durham Museum on this trip. This travelling exhibit on loan from Australia features fossils from a variety of tyrannosaurs, from tiny dinos the size of a chicken, to the largest T-Rex fossil ever found, Scotty. My kids (and husband and I) loved seeing the wide variety of fossils. Because most tyrannosaur skeletons that are found are incomplete and in delicate condition, the actual fossils tend to be kept in climate controlled labs, and museums instead display casts. That's what was used for the large models in this exhibit  as well. But there were several actual fossils on display as well, which was pretty amazing to see!

The fossils and skeletons would've been amazing on their own, but the Tyrannosaur exhibit at the Durham didn't stop there. They also had a ton of interactive screens where visitors could find more information and even play games! One in particular near Scotty was to test your grip strength--and then the screen would show how your grip strength compared to the bite strength of a T-Rex and other powerful creatures like sharks! It was a fun and memorable way to illustrate the strength of a T-Rex with the allure of a carnival game...when we were there, not just the kids, but every dad in the room also lined up at some point to test their strength!

Because of the wonderful combination of dinosaur skeletons, visual displays, information panels, and hands-on activities, I highly recommend Tyrannosaurs: Meet the Family at the Durham Museum for all ages.


The Durham Museum Gift Shop is near the front entrance along the side of the grand hall and featured a wide variety of typical museum souvenirs, plus some unique items like Durham t-shirts and postcards from specific exhibits.

On the edge of the Durham Museum's great hall is a vintage soda fountain and candy counter. It was so busy when we went that we decided not to get drinks, but I'm hoping to next time. They look delicious! The soda fountain offers authentic phosphates and ice cream floats like visitors to Omaha's Union Station could've bought 75 years ago. It's fun to imagine people sitting there at that same counter, drinking similar drinks, decade after decade!

What to bring to the Durham with Kids

I would recommend bringing standard museum-trip gear to the Durham Museum if visiting with kids including:

Along the tracks where visitors can climb aboard real trains, you'll also find "the platform," which is the Durham Museum's most interactive area for kids! At The Platform you'll find a marble run, train tables, a Lego-style brick zone, and other hands-on activities for kids. The Platform is right behind the Durham Museum's main guest elevator, so it's easy to find and access.

Besides the fascinating exhibits and hands-on fun that happens every time the Durham Museum is open, the Durham also has a full programming schedule to provide learning and entertainment to kids, including camps, classes, storytimes, and crafts. Check the schedule on the Durham website to see the full list of events you and your kids can enjoy. Many are free with regular daily admission or a membership! 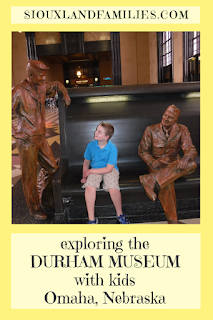 If the Durham sounds like something your family would love, but is too much of a stretch for your current entertainment budget, here are a few ways you can save: