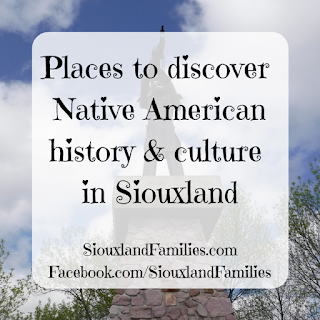 Siouxland has a vibrant Native American culture (as you may guess from the name alone!) with deep roots that reach back before written history. Here are some of the best places in Siouxland to find out more about the people who have been here since before Lewis & Clark spotted our bluffs on their famed expedition, and who continue to make Siouxland great, along where to grab a snack or drink while supporting a local tribe, and some recommendations of other places to learn more about Native Americans in other parts of the Midwest:

The Sioux City Public Museum features a small but worthwhile collection of artifacts and information from Siouxland's earliest residents through modernity.

The center focuses on the history and legacy of the Lewis & Clark Expedition, which would have failed without the aide of the native Americans the Expedition members encountered along their way. The Betty Strong Encounter side of the center also features a permanent exhibit featuring photos of children from the St. Augustine Indian Mission on the Winnebago Reservation in southern Siouxland.

The monument to Chief Waŋbdí Okíčhize, known as "War Eagle", but perhaps better translated as "Little Eagle", honors a Native American leader whose commitment to peace and friendship between the Native American people in this area and the European settlers, including his future son-in-law, Theophile Bruguier, was fundamental in the establishment of the city of Sioux City.
For more information, check out my full post about the War Eagle monument and park.

Today undergoing extensive efforts to restore native prairie, Spirit Mound is a mound of unknown origin (natural vs manmade) shrouded in legend. Lewis & Clark went here, after being warned by the Sioux, the Omaha, and the Otoes, that it was inhabited by small, evil, humanoid spirits and was a place of death. For more information, visit the Spirit Mound website.

The Mitchell prehistoric village is an excavated Native American village dating back thousands of years. It is the only active archaeological site in South Dakota that is open to the public! You can find more information on their website.

This museum on the campus of Little Priest Tribal College is free and open to the public, and is filled with beautiful artifacts of historical and cultural importance to the Winnebago. You can visit their website for more information.

If visiting these great places is making you hungry or thirsty, stop at the Sweetwater Cafe on the skywalk level of downtown Sioux City's Ho-Chunk Centre building, or their location in Winnebago! The cafe is run by the Ho-Chunk Development Corporation of the Winnebago Tribe and serves up delicious drinks and snacks daily. Check their Facebook page for more info on the soup of the day and other specials!

Native American Heritage across the Midwest

I asked some of my Midwest blogger friends to share some of their favorite posts about Native American heritage sites, memorials, museums, monuments, and more in other parts of the Midwest. This list is far from complete, but here are some of their suggestions:

Another option for learning more about Native Americans in the Midwest is to attend a pow-wow*. Tim & Lisa from the Walking Tourists have some great tips for attending a pow-wow. The nearest pow-wow to Sioux City is probably the Winnebago Pow Wow. While it was cancelled in 2020, the event usually happens every July, and details are posted on the Winnebago Tribe of Nebraska website. You can also find out more about the Ponca Tribe powwow on the Ponca Tribe of Nebraska website.