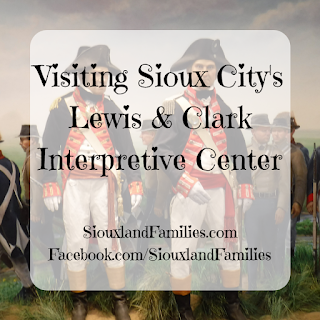 I'm excited to share all about one of my favorite places to visit in Sioux City with kids! One of Siouxland's big claims to fame is that it served as a major portion of the Corps of Discovery Expedition to find the Northwest Passage. Under the leadership of William Clark and Meriweather Lewis, the Corps followed the Missouri River north from Kansas City and west from Sioux City, exploring much of the Siouxland area along the way in late summer 1804. Their legacy remains not just in parks, monuments, and historical sites where they once trod, but also pervades naming in Sioux City, from the Explorers baseball team, to Clark elementary school, to streets like Lewis Boulevard, Clark Street, York Street, and Floyd Boulevard! And one of the best places to learn more about Lewis & Clark and the Corps of Discovery Expedition is at Sioux City's Lewis & Clark Interpretive Center and Betty Strong Encounter Center.

What is the Lewis & Clark Interpretive Center and Betty Strong Encounter Center?

The Lewis & Clark Interpretive Center and Betty Strong Encounter Center is one building with a variety of purposes: the northern section is essentially a museum about the Lewis & Clark's Corps of Discovery Expedition (did you know that's the official name for the Lewis and Clark Expedition?), while the southern section, the Betty Strong Encounter Center, serves as space for cultural and educational events, with a variety of permanent and temporary exhibits. The Center is all on one floor, with a gently sloping floor rather than stairs in the auditorium in the Betty Strong Encounter Center, so all exhibits and programs are fully accessible to people in a wheelchair, stroller, or other mobility aide. The Center also has a research library and many artifacts, like a reproduction of the flower press Lewis used to preserve samples and of his dried flowers and notes that constituted his herbarium--the Expedition brought back 200 botanical samples to share the beauty of the prairie and mountain west with Jeffersonian America! 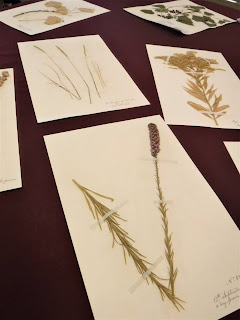 Where is the Lewis & Clark Interpretive Center and Betty Strong Encounter Center?

The Lewis & Clark Interpretive Center and Betty Strong Encounter Center is at Chris Larsen Park Road, along the riverfront of the Missouri River. Larsen Park Road is only available via Hamilton Boulevard as of late February 2021, but check before driving as I-29 construction changes the open routes periodically. Once on Chris Larsen Park Road, the center is just a bit east of the Sergeant Floyd Welcome Center, which is immediately recognizable as "the boat museum." Between the two is a playground and a large picnic shelter. Outside the Lewis and Clark Interpretive Center are a subtle stone ampitheatre built into the hill between the two , and a variety of large sculptures of animals the Expedition encountered in their travels, included a bear, foxes, and a bison!

There are a variety of permanent and temporary exhibits at the center, including:

Usually there are also some hands-on displays, including crayon rubbings, and stamping stations for journals for kids. Those are taken off display right now to help keep everyone healthy, but I'll try to update again when they are back out!

Besides its wonderful exhibits, the center is known for its excellent programming, including 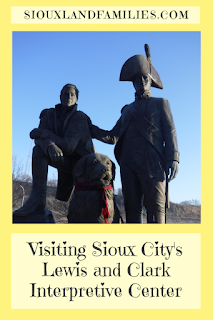 You may also enjoy my post about Native American historical and cultural education sites in Siouxland!