June 09, 2020
The Midwest is full of fun places to go for family vacations, and I'm excited to share them with you! Check out my Midwest destinations page for more ideas to plan your next family trip, and read on to hear more about taking a family trip to Mason City: 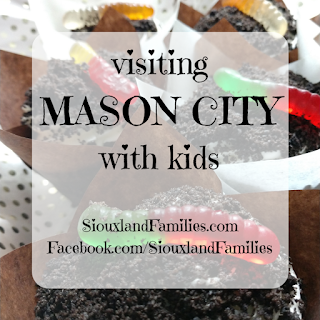 *Disclosure: I received free cupcakes from Grandma Sugar's via the kind people at Visit Mason City!*

Have you ever been to Mason City? It's just a few hours away from us, which makes it a perfect weekend getaway for Siouxland Families, and I think it's totally underrated. Mason City is full of opportunities for family fun! Here's what you should know about visiting Mason City, Iowa with kids.

Where is Mason City?

Mason City is in north central Iowa, between highway 20 and the Minnesota border. From Sioux City, it's an easy drive along 20 most of the way, then just a bit north on 35.

What to do in Mason City

Mason City is surprising in the number of attractions and events for kids and families for a city of its size! Some of Mason City's most fun places to go are closed right now due to the COVID-19 pandemic, so I recommend checking before you head over. But when they're open, a few of my top recommendations include: 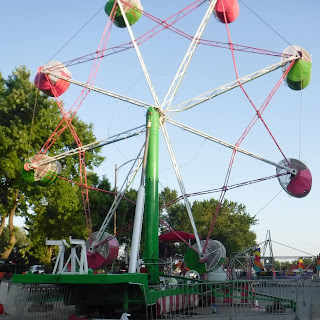 If you're in Mason City during mid-July, definitely check out the North Iowa Fair. The fair is free to attend, and many of the rides are free as well! You can check out my full post on the North Iowa Fair here.
Coming in winter? Check out the Local Tourist's post on Christmas in River City (all the attractions listed would be fun in any cold weather, not just at Christmasstime!)

Mason City is home to artist Bill Baird, who designed the original puppets from the Lonely Goatherd in the Sound of Music, and you can actually go see them at the Charles H. MacNider Art Museum in Mason City! This museum would be a must-see even if that's all it had, but also contains a variety of other delightful exhibits including works by regional master Thomas Hart Benton and other notable artist. It's also a great place to pick up a brochure about Mason City's sculpture walk! 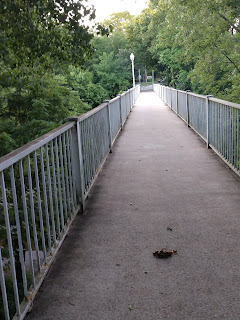 Across Mason City's Willow Creek, a long footbridge near Music Man Square and the MacNider museum offers one of Mason City's best views. When my family went, we saw several young deer romping around the banks of the creek, and ducks swimming in the creek to the delight of our toddler. Some people believe the Meredith Wilson footbridge could've also served as at least partial inspiration for one of the most picturesque scenes in The Music Man!

Mason City has several architecturally significant buildings, including the last remaining Frank Lloyd Wright designed and built hotel, the Historic Park Inn, and many other prairie school and craftsman style structures. Tangled Up in Food has a great post on Finding Frank Lloyd Wright in Mason City, Iowa. The Stockman House and the Historic Park Inn both offer tours for architecture lovers.

If your kids love trains, be sure to stop by East Park to check out this huge train engine! The Cannonball 457 was part of the Minneapolis & St. Louis railroad, and has been beautifully restores to its 1912 original condition. Gardens surround the train, and tours of the train are available.

What to eat in Mason City

My Grandma had a magnet on her fridge that said "Life is uncertain...eat dessert first!" and I love that philosophy! But whether you're having your dessert first or last, Grandma Sugar's Cupcakery is definitely worth a stop during your Mason City visit. Grandma Sugar's is known for their gourmet cupcakes that taste homemade, but like homemade by a professional pastry chef. The flavors and decorating are deceptively simple--classics done really well, and the portions generous. We were in Mason City on our son's birthday and he loves gummy worms, so we tried Dirt Cup, which were vanilla and chocolate cupcakes with vanilla buttercream frosting, crushed chocolate cookie crumbs, and gummy worms. Both flavors of cake were moist and flavorful, and our son was thrilled with how cute they were. The gummy worms were fresh and the cookie crumbs had just the right amount of crunch to add textural interest to the cupcakes.  In other words, she definitely hit it out of the park. If you are looking for sweet treats in Mason City, you definitely can't go wrong with Grandma Sugar's.

We ate Black Dog BBQ courtesy of the North Iowa Fair, and the Mason City based bbq team definitely showed why they win so many awards. Their food was just the right blend of spicy and sweet, with high-quality meat and fresh bread. We also appreciated that they had simple options like hot dogs for kids--not all of our kids are adventurous eaters yet, and I hate when the only choices are to go somewhere bland for kid-friendly choices, or buy expensive and spicy meals they won't like but we will. At Black Dog, you don't have to make that decision. You can buy great barbeque for the members of your family who love it, and inexpensive but still delicious hot dogs for the people who don't! Black Dog BBQ is food truck based, so check their FB page to see where they will be when you're in town.

Birdsall's has been selling some of Mason City's best ice cream for almost 90 years and is considered a local icon (it was even featured in a picture book!) We didn't stop by because several members of our family are lactose intolerant, but I've heard many glowing reviews of it.
*update: Birdsall's is permanently closed as of spring 2021. I will try to update if I hear that change*

Where to stay in Mason City, Iowa

I already mentioned the Historic Park Inn during the architecture section, but unfortunately guests there must be 21 or older, so it's not a great option if you're travelling with kids. For families with kids, I can personally recommend the Country Inn & Suites, and have heard good things about the Holiday Inn Express as well  (it was recommended by The Walking Tourists in their post, Forget Trouble, There's Fun in River City!) Both have pools, breakfast, and free Wi-Fi!

Thank you to Visit Mason City and Grandma Sugar's for the cupcakes! 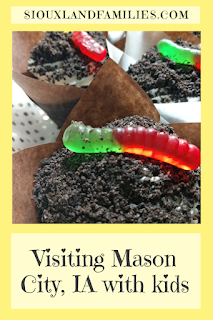