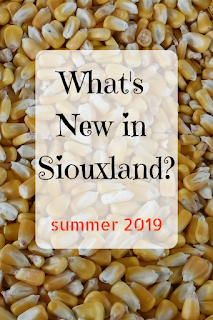 If you've lived in Sioux City very long, or even visited much, you might think you've seen all there is to see. But there's actually tons of new fun to discover! Here are some of the top new exhibits, attractions, and upgrades in Siouxland for summer 2019:

Bandits and Heroes exhibit at the Sioux City Public Museum


Miracle Field at Riverside Park was already one of Sioux City's best places to play, and they've taken it up another notch by adding a toddler playground. The adorable small-scale play structures are just perfect for the under-5 crowd, and to the delight of parents, the new toddler play area is completely fenced in with only one way out!
Also new at Miracle Field this summer is a really fun, wheelchair-accessible spinning toy, a shade cover over the musical playground, and two new swings! Want to know more about Miracle Field? Check out my Miracle Field overview.


Since at least the early 1800's, fur trappers and native Americans followed a route through Siouxland, along the Missouri River, and in the early 1900's, a plaque was placed marking part of that trail, in what is now War Eagle Park. Over time, that plaque was lost. Sioux City historians recently uncovered the rock, and were able to order a replacement plaque from the same foundry where the original was forged! Now, visitors can see the rock and plaque, along with a nearby information plaque about the park. For more information on War Eagle Park, check out my War Eagle Monument and Park post.

The Siouxland Artists Exhibition at the Sioux City Art Center is on the second floor of the Sioux City Art Center and puts the focus on local artists with pieces from a variety of mediums. Catch it quickly if you're interested, because it won't be here long--the Siouxland Artists Exhibition will be on display through September 1st.

The Morningside Branch of the Sioux City Public Library was completely renovated over winter and spring, and is now officially re-opened to the public! Highlights include a colorful kids area anchored by a tree, a teen area with comfy seating, new computers, new self-checkout kiosks, several small meeting/work rooms, and a huge room for storytimes, classes, and other special events!

"Best of" exhibits at the Sioux City Art Center

Scarecrow Farm in Lawton, Iowa, about 10 minutes east of Sioux City, is hosting their first ever sunflower festival, on September 14th and 15th, 2019. The Sunflower Festival will include live music, family-friendly fun, delicious food, and tons of beautiful sunflowers, for $12 per person 3 years and older. More details coming soon!

Sioux City is always changing and upgrading, so keep your eyes open for new fun! I'll try to share it when I see it too!